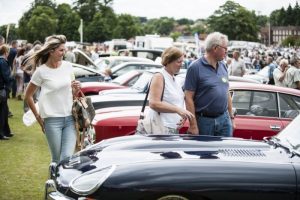 Few would disagree with the view of a Harpenden Town Councillor that Harpenden Common is ‘the jewel in the town’s crown.’ The vast tract of common grassland sweeping you into the town centre from the south is home to a golf club, two cricket clubs, a football club and the occasional fair and circus. Yet this Green Flag Award-Winning space still provides acres of recreational space for residents and visitors.

But since 1994, for one day a year, this idyllic scene is interrupted for a few hours for what has become one of the biggest mid-week classic car shows in Britain. Classics on the Common was the brain-child of classic car enthusiasts John Tibble, then landlord of the Carpenters Arms and  Peter Madden, a Harpenden resident and Metropolitan Police officer. The first year’s show attracted 125 cars. In 2021, our 27th year, nearly 700 classic vehicles, motorcycles and scooters arrived on Harpenden Common from all over the UK. According to senior Rotary sources the event can be seen from space!

And there’s never any shortage of admirers. Thousands of spectators spend hours admiring the mouth-watering collection.

For 2021, a classic vehicle had to be at least 25 years old but we usually have one or two from around a century ago, such as a 1913 model T Ford, and a 1916 Stanley Steamer. Every decade following is well represented, too, from Rolls Royces and Maseratis to Austin A40s and Morris Minors. We’ve even had a Sinclair C5. We also like to encourage diversity and invite some “supercars” to the event.

In 2009, Harpenden Village Rotary Club took over responsibility for organising and running the show and in 2016 the charity Rotary in Harpenden took over. Rotarians are no strangers to running events and, although we have over 40 members, we need another 50 volunteers to help make the day a success.

We are very grateful to have our numbers boosted by members of our associated club, Harpenden Village Inner Wheel, and St Albans & Harpenden Police Cadets. Other helpers include members of Harpenden Round Table, 41 Club, Harpenden Lions Club and Carpenters Arms Classic Car Club. Volunteers from the principal charities supported by the show get involved in bucket shaking during the day. Also we could not put on the event without the active and welcome support of friends and family.

At heart, Classics on the Common remains a community event. Its charity fundraising is significant, too: over the show’s 27-year life nearly £300,000 has been distributed to local, children’s, national and international charities.

Classic vehicle owners make a donation to enter and, although there is no entry charge to the public, spectators have always responded generously when approached with collecting buckets.

We encourage local businesses linked to the motoring market by having stalls where they can sell their products, taking banner advertising and in recent years local motoring companies have been able to take space to diplay their newest models..

In 2020 we had a enforced holiday through Covid but we came back with a bang in 2021. Despite being in September the  weather was amazing and thanks to the huge generosity of our spectators and sponsors, we raised an over £33,000 for our charities and other good causes. This enabled Rotary in Harpenden to donate sizeable sums to Harpenden Trust, Hope and Homes for Children and Harpenden Spotlight on Africa.

We encourage all entrants who are UK taxpayers to tick the Gift Aid box on the Ticket Application Form. This allows us to claim from the tax man an extra 25% of the value of their entry fee donation, without any extra cost to them, and increases the amount we are able to donate to charity.

In 2022 we were able to stage the show at the traditional time – late July. For the report and many photos go to the Home page.

It was a long time coming. And we got away with it again!

Despite being in September, for the 8th year in succession the weather for CLASSICS ON THE COMMON 2021 was good. Not just good, but wonderful. And with the weather came the crowds. A massive thank you to the people of Harpenden and beyond who came to view the cars and who have been so very generous again.

An amazing result from the collection. Over £33,000 has been raised which Rotary in Harpenden will give to charitable causes.

Our commercial sponsors had another very good day with their stands and banners.

“The magnificent turnout of cars and spectators just proves how valuable Classics on the Common is to Harpenden.

We could not have asked for better conditions or support and we were delighted to offer people a day out in the sunshine. The event also directly helps charities to do their very important work.

Classics could not happen without our sponsor, Harpenden Town Council, the police and emergency services to whom we send our grateful thanks for their continued support.”

Our usual eclectic mix was topped off by a 1900 Daimler who arrived suitably late, like the star she is. Even the phalanx of Rolls Royces and Bentleys were slightly over-shadowed.

Models like the frog eye Sprite, Lotus Cortina, Mk1 Golf with “Pireli alloys” (very rare), Ferrari 308, Triumph Herald , Split Screen VW camper and a Mini traveller stood out among over 700 classic and supercars on display. A huge thank you to the owners who put so much time and effort to make their cars shine.

The main charities to benefit from the funds raised were:

We know money is not everything, and getting involved practically can be very rewarding. If you would like to join us in Rotary, please go to hvrc.net where you can find details.